Pat's Place is the July Business of the Month

When Pat Spann decided to quit his day job and start his own business in 1980, he had several items in the positive column: youth and energy, intelligence, and personality.

He found a building at 1526 S. Lee St. in Americus for sale and renovated and redecorated it.  With only one part-time employee, he opened Pat’s Place.  The iconic eatery has been selected as the July Business of the Month by the Sumter County Chamber of Commerce.

“I really didn’t think about it failing or how long I’d be doing it, but I can’t believe it’s been 40 years,” Spann said.

Spann started small, first offering only pizza, deli sandwiches, cold plates, and homemade vegetable beef soup, and beer, along with a poolroom.  He also made the decision to join the local Chamber of Commerce, a decision he has never regretted.

“I joined the Chamber because I thought it would be a way to get ‘legitimized’ quickly and to be regarded as a serious business that would succeed and not be a ‘fly by night’ quick thing,“ he said.

Spann said he had always known the Chamber of Commerce was a help to business, promoting business in a way that he did not possess at the beginning.  “I think I joined the Chamber before we even opened,” he said.

From the start, Spann said he was surprised at the number of people who came to Pat’s Place.  “As a result of the Chamber, we had a lot of people from downtown businesses who came in and they’d tell their friends about us and bring them in.  It grew from there,” he said.

Spann said that in the early days, the business drew in students at then-Georgia Southwestern College as well.  The drinking age was 18 back then.  “But even more, we had business from working people and storeowners and downtown merchants,” he said, adding that it was word of mouth advertising because, having been basically new to the community, he didn’t know the people who were his customers early on.

“Even though we have beer, we’re really not a bar,” he said.  “We’re a pub or a restaurant that happens to have beer.” He said he is always welcomed kids into the business because they are future customers.  “It turned out to be true,” he said.  “People who were college students then are now grandparents so not only do they still come in, they often bring their children and grandchildren.  We’re lucky they feel comfortable enough to come in, bring their kids for pool and pizza or something else to eat,” he said, adding that the atmosphere at Pat’s Place is family friendly.

And there are other regulars: folks who come in most every day or weekly every two to three weeks.  He said the kids come in with their parents more during the summertime and during school holidays.  “It’s a very important part of maintaining a volume of business that keeps it going,” he said.

As well as family friendly and welcoming, Pat’s Place is a stable business.  Spann said it is very flattering to see customers come back in while visiting family here during vacation or at Thanksgiving.  “They tell us that there are two or three places they make sure to visit when they come back to town, and we’re one,” he said.

Pat’s Place is also a “staple” of the local business community.

“Because of the length of time and the number of people who’ve grown up with us, we’ve become a sort of icon,” Spann said, “It’s a place that people really like to come to, especially when they’ve been living somewhere else and come back visit to visit family. There are a lot of fraternity people who were here 20 years ago who come back for local functions and they visit us … we are glad we have been able to maintain what we have … We’re happy to be here.”

Spann’s brothers have also been involved in Pat’s Place.  Tom worked there for several years, and Steve came on board when Pat’s Place opened a downtown location which was open for about a year.  Spann has hired legions of employees over the past 40 years, many of whom worked while attending college.  “They stay a long time,” Spann said.  “There are no snort-timers.”

A comment from a former employee on Glassdoor states: “Best boss you could ask for.  Cares about his people and shows it.  Customers are great because they respect the owner.  An Americus icon and a wonderful place to work.”

During the Covid 19 health crisis, Pat’s Place was closed beginning March 10 to inside dining and offered curb service.  Most people called ahead and drove up to have their orders delivered to their car.  If you are a Pat’s Place fan, you know you cannot go without for long.

Since 1960, Pat’s has been open for inside dining with some restrictions.  There are only seven tables open inside and one on the porch.  There are also three tables located outside with some shade.

Spann said that since the Covid 19 crisis, his business has continued because of the generosity of people, often anonymously, who have pizza delivered to the folks on the front lines who are still out there every day. He said they have delivered pizzas to Phoebe Sumter Medical   Center and its employees located in various departments of the hospital, local nursing homes, Americus Police Department, Americus Fire and Emergency Services, air evac and ambulance service, local pharmacies and physicians’ offices, after hours health clinics, Georgia Southwestern State University, Central Baptist daycare, Lowe’s, Tepuy, Citizens Bank, and U.S. Post Office,. He said many people who come in for business who gave money to pay for the next healthcare worker’s tab.

The Sumter County Chamber is honored to present the July “Business of the Month” to Pat’s Place that has been serving Sumter County for over   Years.   Thank you, Pat, and all your staff, for serving Americus and Sumter County.  The Chamber continues to serve all businesses in Sumter County, now for over 100 years of service.  Thank you for Pat for your commitment and dedication to Americus, Sumter County, said Carolyn Wright, President. 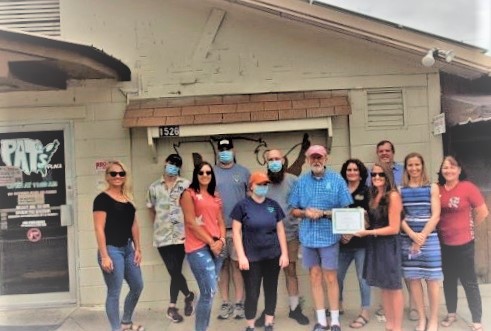