The Baldwin Agency named October Business of the Month

The Sumter County Chamber of Commerce has chosen The Baldwin Agency as its Business of the Month for October.

Raymond Baldwin, George Torbert, and Jed Jessup hold the reins of an insurance business that traces its roots back to the late 19th century.  Raymond Baldwin’s father Ray, and Uncle Ted Baldwin, purchased The Walters Agency (founded in 1889) in 1960, and its tradition of excellent customer service and commitment continues today through economic downturns and natural disasters such as the flood of July 1994, and the tornado that struck Sumter County in March 2007.  Those are the times that people need the support of their insurance company more than ever.  The Baldwin Agency provided the service and support despite losing their office to the tornado of 2007.

In 1992, cousins Raymond Baldwin and David Baldwin, who had grown up in the insurance business, bought out Jim Bowen’s insurance agency, and in 1998 Raymond and David returned back to the family business and bought the agency from their fathers. Then in 1999 they decided to partner with Strategic Independent Agents Alliance (SIAA), and they started Georgia Agents Insurance Network, Inc. (GAIN).  After starting GAIN, they purchased the entire South Georgia territory, which is composed of about half of the state, from Columbus to Savannah and from Bainbridge to Brunswick.  Over the past 21 years, they have brought in 48 member agencies.  “We serve as a mentor for our members by lending our expertise,” said Baldwin.  GAIN also operates in the same office as The Baldwin Agency.

Jed Jessup came on board with the agency as a Recruiter for GAIN in 2014.  George Torbert joined The Baldwin Agency in 2014 and on Jan. 1, 2016, Jessup and Torbert bought out David Baldwin’s share of The Baldwin Agency and GAIN.  David still serves as a producer/agent and consultant for the Agency.

Raymond Baldwin explained that the agency carries all types of insurance.  The agency writes all lines of commercial insurance for businesses of all sizes, as well as agricultural insurance for all types of farms.  They write insurance for governments, such as cities, counties, and school systems.  Last but not least they write personal lines of insurance from home and auto to life insurance and anything in between.
The Baldwin Agency currently has 11 employees at its expansive 6,000 sq. ft. building located at 1617 E. Lamar St. in Americus.  Raymond Baldwin explained that when the former office building at 702 E. Lamar St., was destroyed by the 2007 tornado, many employees’ homes were also damaged.  They regrouped and met at the homes of other employees who were not affected, and managed the hundreds of claims that came in.  That is dedicated customer service!  The new building on East Lamar was completed in 2009.

In 2010, the Sumter County Chamber of Commerce recognized The Baldwin Agency as the Small Business of the Year.  Since then they have been constantly evolving to be able to offer superior customer service to their clients.  They have made significant investments in technology to be able to service their clients in an efficient and secure manner.

As for the future, Raymond Baldwin said, “We’re pushing forward, and looking to work with another generation.” George Torbert said, “the coronavirus has affected how the business operates, as it has everyone else’s.  We worked remotely from the second week in March until mid-July.” Business is mainly being conducted electronically and through their drive through window, but they are happy to try and accommodate their clients in any way that keeps both their clients and employees safe.  If you have any questions, please give them a call at 229-924-2727. 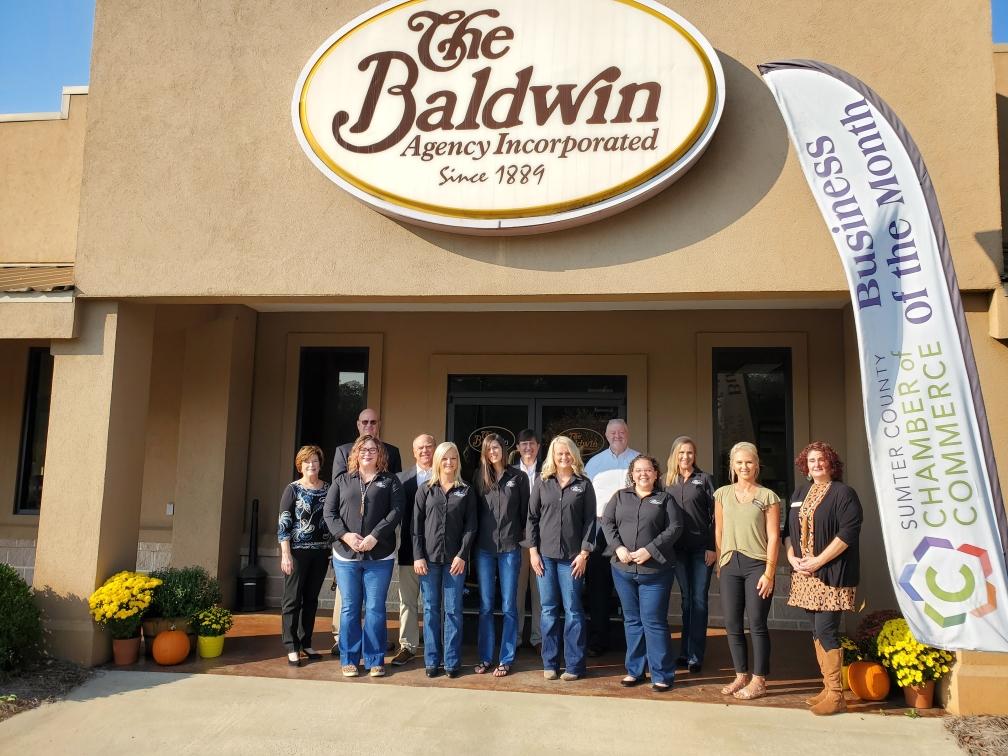